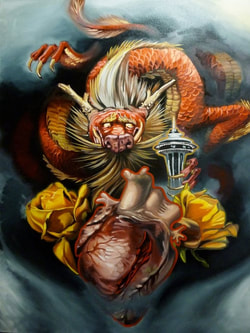 The Seattle tattoo convention started as the brain child of Damon Conklin (that’s me) and Gloria Connors.
I’ve always loved being a seattlite and Being a member of the tattoo community and I really wanted to bring the two together. After asking around and talking about the idea with anyone who would appear to listen a friend of  one introduced my to an awesome local event producer named Gloria Connors who had been interested in the tattoo convention idea herself. In a mad scramble we harnessed all our resources and hosted the first annual Seattle tattoo convention at con works it was a small eclectic event with lots of energy and lots of room to grow and grow we did within a few short years we grew into a mainstay on the world tattoo convention circuit and have hosted amazing artists from all over the globe. For the first 15 years I handled the bulk of the art load and some of the artists relations and Gloria handled ... well pretty much all the real work planning and executing an awesome event year in and year out. It’s been a great honor to have had the experience of starting an event that has played such a huge roll in the tattoo culture of our area and continues to grow in the capable hands of Jeff Cornell (hidden hand tattoo) and Gloria Connors. This event is and always has been a meeting place for friends old and new. A showcase for artists emerging and established. The Seattle tattoo expo is a chance for the tattoo world to enjoy our amazing city and an opportunity for our city to experience the untamed splendor of the tattoo world.
Proudly powered by Weebly